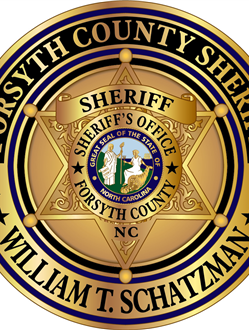 On February 6th, uniformed patrol units responded to a Bank Robbery at the Wells Fargo Bank located at 6460 Shallowford Rd. Once on scene, evidence was preserved and a perimeter was set up to locate the suspect. Investigators Little and Shaver began their investigation and identified the suspect by viewing bank surveillance video and performing a canvass of the immediate area.

Throughout the course of this investigation, Investigators Little and Shaver continued to develop information, which allowed them to obtain a Search Warrant for the suspect's home. The search of the residence yielded US Currency taken from the bank robbery and clothes used by the suspect to complete the robbery. The suspect was not located at the home. A neighbor reported that he received texts from the suspect but did not respond to the text messages. The new information led Investigators Little and Shaver to apply for a Search Warrant for phone records, which allowed them to pinpoint the suspect's location. On February 8th, the suspect was apprehended and placed into the Forsyth County Law Enforcement Detention Center for the bank robbery and two additional robberies.