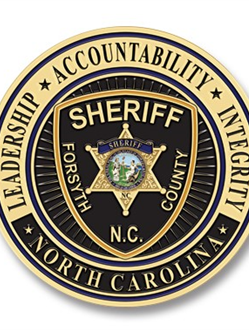 In July, patrol was dispatched to an address where subjects appeared to be breaking into a residence. Corporal Sorrell, Deputy Southard, and Deputy Genest responded in an attempt to locate the suspects. While these three officers were securing the outside of the residence, the suspects were seen inside and were immediately taken into custody. The fast response, checking and maintaining control of the exterior of the residence by those initial officers led to the capture of two individuals who have been linked to multiple criminal acts within Winston-Salem but were apprehended when they started their crime spree in the county.