Investigator Holland (pictured left in photo) began his public safety career in 1975 with the N.C. State Highway Patrol. After 9 years with the NCSHP, he moved out of North Carolina. However, he returned & completed BLET a second time in 1995. He was hired by the FCSO in 1996 as a patrol officer. 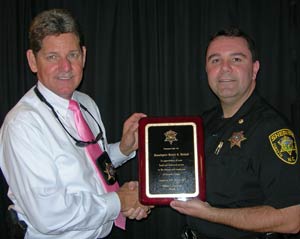