Reserve Officer of the Year 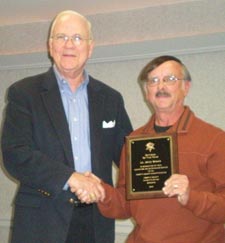 The Forsyth County Sheriff's Office Reserve program is composed of volunteer law enforcement personnel who supplement the on-street deputies in every division of the Sheriff’s Office. All Reserve Officers complete the same mandatory training each year as our full-time Deputies. A Reserve Deputy is a sworn officer with all the responsibilities and authority of any other deputy. Our primary function is to assist in manpower when and where needed in support of the Sheriff’s Office mission. Although our primary function is to aid the Patrol Division we often provide support to other divisions within the agency. We also take the lead in many special events such as the Winston-Salem Air Show, various charity events and public service events across Forsyth County.

Lieutenant Brown has a wife, three children and granddaughter. He enjoys spending his free time at Lake Norman with his family during the summer months. Congratulations Lt. Brown!