The newly formed 4-H club, “The Junior Stockman Group” met on Saturday August 13, 2011 at the King Fairground Livestock barn for an educational session on a variety of livestock. Friends of the Junior Stockman brought 13 different types of livestock to the barn to enhance the learning experience. Pens were set up and the participants rotated through the different stations.

First in line were 2 Suffolk/Hampshire breed sheep brought in by Larry Durham. After a short discussion Mr. Durham provided the group with an actual sheep sheering demonstration. 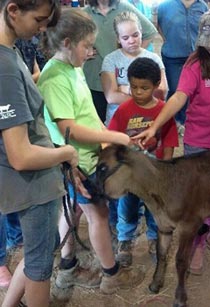 Next 3 different breeds of beef cattle were on display from Mary Joe Hanes and Rick Joyce, including a calf that was being bottle raised. Beside the cattle were 2 miniature donkeys used as guardians to a small goat herd. The donkeys were friendly and enjoyed all the petting and attention.

Kathleen Albee brought 2 kinds of sheep, Montadale noted for both high-quality carcasses and excellent wool. Montadale were developed by breeding the Columbia sheep with a breed known as Cheviot, which was the other breed that Mrs. Albee had on display. Their wool has a distinctive shape which makes it resilient. They are hornless and do not have wool on their faces.

Along with her sheep, Kathleen discussed the differences in the 2 kinds of fiber goats she displayed. The Cashmere goats are famous for their very soft under hair widely used in the clothing industry. Her Angora goat with its interesting coat put some in mind of dreadlocks. Both types of fiber can be used to make clothings, rugs, etc.

Bonnie Anthony provided the group with 2 beautiful yearling Boer does (females). This breed of goats, generally white with brown heads, originated in South Africa and are popular for their meat.

John Leap hauled in his pet Nigerian Pygmies. These goats are used for milk and meat production and their very small size makes them extremely popular as pets. They come in a variety of beautiful colors. 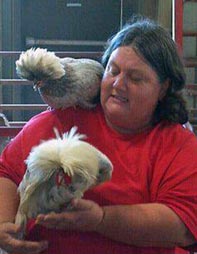 Three kinds of chickens were on hand. Tommy and Ronda Durham brought their Blue Maran hens. These large hens are bluish grey and brown in color and lay very dark brown eggs. The Anthony’s also brought their Polish hens. Bonnie described interesting facts about these unusual chickens as her hen sat on her shoulder. This breed of chickens is recognized by their feathery topknot. She also came with a Frizzle hen which sported dark feathers growing in a backward pattern. Completing the fowl line up was a pet Peking duck.

The group finished their livestock discussion at a cage holding 3 beautiful Tamworth piglets. Mrs. Durham explained that this breed of pig is extremely hardy surviving quite well on just pasture. The mother Tamworth is very protective of her young.

After a break, complete with snacks provided by Beth Tucker, the group tried their hand at milking a “cow”. A life sized plywood Holstein cow had an “udder’ which produced “milk”. Students learned that hand milking a cow was harder than it appeared.

After an interesting morning learning about livestock, the club was invited to the 4-H End of Summer Jamboree also held at the fairgrounds which provided all 4-Hers lots of fun on several big inflatables, sno cones and hot dogs with all the fixings.

Membership to the Junior Stockman Group is open to any youth with an interest in livestock regardless of what county they might reside. Members do not need to live on farms or actually own livestock. The group’s next event is tentatively planned for Nov 20 from 3-5. At that meeting plans call for a dog agility demonstration, snacks and a brief meeting to gather more information about what members would like to do and learn about. Everyone is most welcome! For more info please contact April Bowman, Forsyth County 4-H Extension Agent at 703-2850 or at 4H@forsyth.cc.