After 20 years of service to Forsyth County, Captain Donna Holmes retired from the Forsyth County Sheriff's Office on February 29, 2012. 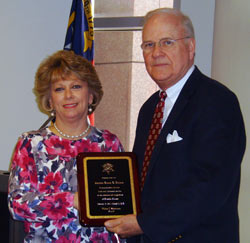 Captain Holmes began her public safety career in 1982 at the Stokes County Sheriff’s Office. She was hired on January 19, 1991 with the FCSO as a Detention Officer. She worked her way through the ranks, working as an Administrative Assistant, Detention Records Manager and finally to the rank of Captain of Administrative Services.

Captain Holmes’ strong work ethic, leadership skills, community relations and genuine interest in helping inmates improve their lives have been an integral part of making the LEDC a professional and efficient facility. Her knowledge and guidance will be missed and we wish her the best in all future endeavors. Congratulations Captain Holmes!