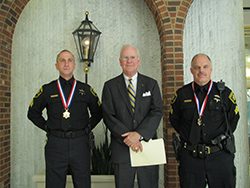 The Rufus W. Dalton Trust was established by a bequest in 1983 from Rufus W. Dalton, to recognize and assist officers who are injured in the line of duty or the spouses and children of those who are killed in the performance of their duties. The chosen recipient is given a cash award along with a prestigious medal. The trust is administered by the Winston-Salem Foundation, in Winston-Salem, North Carolina.

During the assault, the inmate seized and discharged Sergeant Huttar’s pepper spray against him. Although he did not need hospitalization, Sergeant Huttar received emergency and outpatient treatment for numerous visible injuries and contusions to his face and body.

Sergeant Huttar chose to return to work the following day and was able to fully and professionally discharge his duties despite the physical and psychological trauma he suffered as a result of this critical line-of-duty incident.

Sergeant Huttar has served faithfully in the Forsyth County Sheriff’s Office since March 3, 1990 He is an active member of the Special Response Team as part of Security Services in the Detention Center. Sgt. Huttar is also a member of the Army National Guard and is scheduled to deploy to the Middle East for 10-12 months in June.

Sergeant Anderson was struck by a vehicle while directing traffic at Jefferson Elementary School in the 4600 block of Robinhood Road On March 23, 2011.

He was transported to Forsyth Medical Center where he was treated and released. Although Sergeant Anderson was not hospitalized, he received emergency and outpatient treatment for a severe left calf contusion in addition to injuries to his lower leg.

He also received physical therapy during his rehabilitation and was dependent upon crutches for approximately four (4) weeks. Upon his return to the Sheriff’s Office, Sergeant Anderson was assigned to light duty and did not return to full duty until June 8, 2011.