Is that a Cottonmouth? No, not around here! 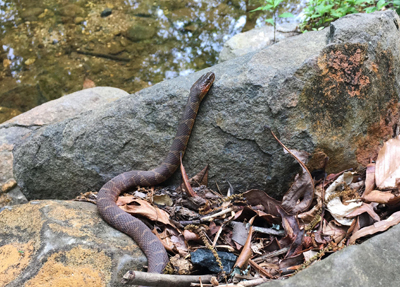 The northern watersnake, (Nerodia sipedon), is often mistaken for some of its venomous counterparts, especially the cottonmouth, or sometimes the copperhead. But take a closer look. The darker repeating bands along the body are wide in the center and narrower towards the belly, unlike the copperhead which displays dark crossbands that are more hour-glass shaped. Individual northern water snakes exhibit variations in color and often display patterns that take on a more broken, or splotchy appearance. Juveniles are boldly patterned, but adults tend to darken with age and occasionally appear almost uniformly black or brown. Like cottonmouths, northern water snakes obtain most of their food from the water in the form of fish and amphibians. Unlike cottonmouths, which are found in more eastern portions of the state, northern watersnakes are nonvenomous, but when disturbed they often appear more threatening by flattening their head and body to appear larger. If handled they will likely bite and release a foul-smelling musk. Females have been known to give birth to up to 50 young in the late summer or early fall, but many of these are preyed upon by game fish, making them an important component of lake and pond ecosystems.

For further details on all North Carolina snakes visit the Amphibians and Reptiles of North Carolina website, http://herpsofnc.org/, maintained by the Davidson College Herpetology Lab and click on any “Snakes” thumbnail.

N.C. State University Extension offers the publication Reptiles and Amphibians in Your Backyard, https://content.ces.ncsu.edu/reptiles-and-amphibians-in-your-backyard. Download here, or drop by the Forsyth County Center of N.C. Cooperative Extension at 1450 Fairchild Road in Winston-Salem to pick up a free copy.

Martof, B., Palmer, W., Bailey, J. and Harrison, J. Amphibians and Reptiles of the Carolinas and Virginia. The University of North Carolina Press, Chapel Hill, N.C.