On Friday, September 13, 2019, Senator Joyce Krawiec visited the Trailblazers Teen 4-H Club meeting. Several of their club members met Senator Krawiec, who is also a 4-H alumnus, during Capital Fest in March. During that visit, she encouraged 4-H’ers us to continue to be involved as youth in our state government and kindly offered to come visit with our club during a meeting.

The visit occurred just after the surprise override of Governor Cooper’s veto of the state budget. “It was interesting and enlightening to hear from someone who was at the Capital on Wednesday during the process”, said Calleigh Wilson, photographer for the Trailblazers Teen Club. Most of the Democrats were not there for the vote; the total was 55 votes in favor and 9 opposed of the override. Senator Krawiec shared with us that there were at least two procedures Democrats could have followed to ensure their voices were heard. First, the Democrats that were in attendance could have walked out, which would have prevented a vote, because there was not a quorum. A quorum is a minimum number of members in a group that could make a vote valid. The second way was for at least one Democrat to vote yes, then that representative would be able to request a recall vote later when all members were present. Neither of these methods was utilized.

Senator Krawiec also shared with the teens how she became involved in politics and stated that she believes God opened a door for her and she will continue to serve until the door is closed. Her faith and belief are what allowed her not to be stressed or anxious over the re-districting that was also taking place during her visit. If she is not re-elected to serve another term then she sees it as the door closing.

The Teens enjoyed hearing more about the democratic process and learning from the Senator.

Ethan Cook, Reporter for the Trailblazers Teen 4-H Club stated that “Senator Krawiec shared lots of information with us and was the perfect addition to our September meeting!”

The club is grateful to Ms. Debbie Lown, who worked with Ethan to arrange the visit. 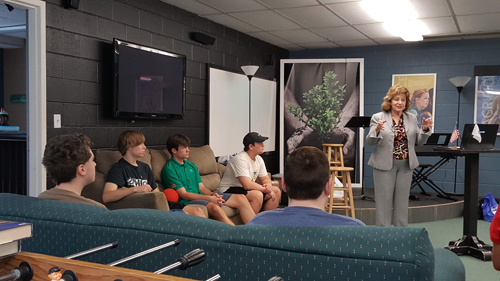